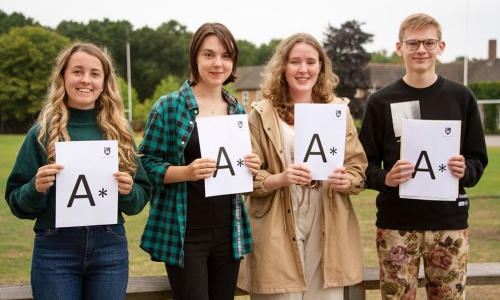 According to two separate polls, Hill House has been ranked in the Top Ten Independent schools in Yorkshire.

The lists, published by the Telegraph compare the performance of independent schools based on GCSE and A level results.

Pupils at Hill House received another year of outstanding A levels with a massive 51% graded at A*/A with 37% of pupils gaining straight As and A*s, and the school securing its fifth consecutive year of a 100% pass rate.

The school was also exceptionally proud of the pupils’ GCSE results this year, despite concerns that the effects of COVID and harsher marking would lead to much lower results than in the previous two years. In fact, the pass rate at grade 4 and above at Doncaster’s Independent School was a massive 98%, with 51% of GCSEs earning the top grades of 9 to 7.

Headmaster, Mr David Holland, said: ‘Its fantastic that both the GCSE and A level results of our pupils have been recognised in this list. We are incredibly proud of the hard-work that they have put in, especially over the last few years given the disruption of the pandemic.

For them to emerge from this difficult time with such fabulous results is a testament to their resilience and commitment, and to the marvellous support of their teachers and families.”

In July of this year, Hill House was also accepted into membership of HMC (The Heads' Conference), the elite group of the world’s top 350 and independent schools.