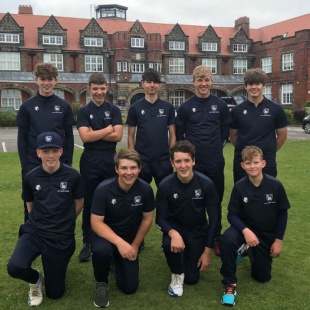 Cricketers at Hill House are celebrating after winning a national championship this week. The Under 15 boys’ cricket team travelled to Scarborough to take part in a national Schools’ T10 cricket championships.

In their first match, the Doncaster boys made a good start in beating hosts Scarborough College by 24 runs, with Captain Henry Holland top scoring with 37 not out. A strong performance followed against Wakefield’s Silcoates School, which saw victory by 50 runs, with 46 not out by Dax Millington.

In a very tense semi final against Newcastle School for Boys, Hill House bowled first, restricting the Northumbrians to 74-4 in their 10 overs. After a good start from Tickhill’s Nathaniel Wilkes, Hill House collapsed to 43-5 and defeat looked inevitable. Finnan Doody and Harry Smith bravely repaired the damage and then required 12 for victory from the final over. With 5 needed from the last 2 balls, Bawtry’s Doody crashed a cover drive for 4, followed by another 4 for a stunning last ball victory.

This earned the Hill House team a final showdown with Hull Collegiate School. Batting first, the Doncaster boys scored an impressive 101-3, with Millington scoring his first half century for the school. With Hill House fielding and bowling with great intensity, the critical moment came when the Hull captain, having scored a century and 2 half centuries already in the day, was caught superbly by Doody off the bowling of Flynn Love-Money. Pressing home this advantage, the Hill House boys completed a splendid 40 run victory, and in the process won the prestigious Society of Heads’ Shield.

Master in charge of cricket Sam Owen was delighted, saying ‘this victory was very well deserved - these boys have worked very hard this year and earned this stunning success. It shows how strong cricket is at Hill House in particular and in Doncaster in general. Captain Henry Holland added ‘every team in the tournament had some top quality players, but we had a squad with real depth and talent; it was great to see everyone contribute in this victory!’