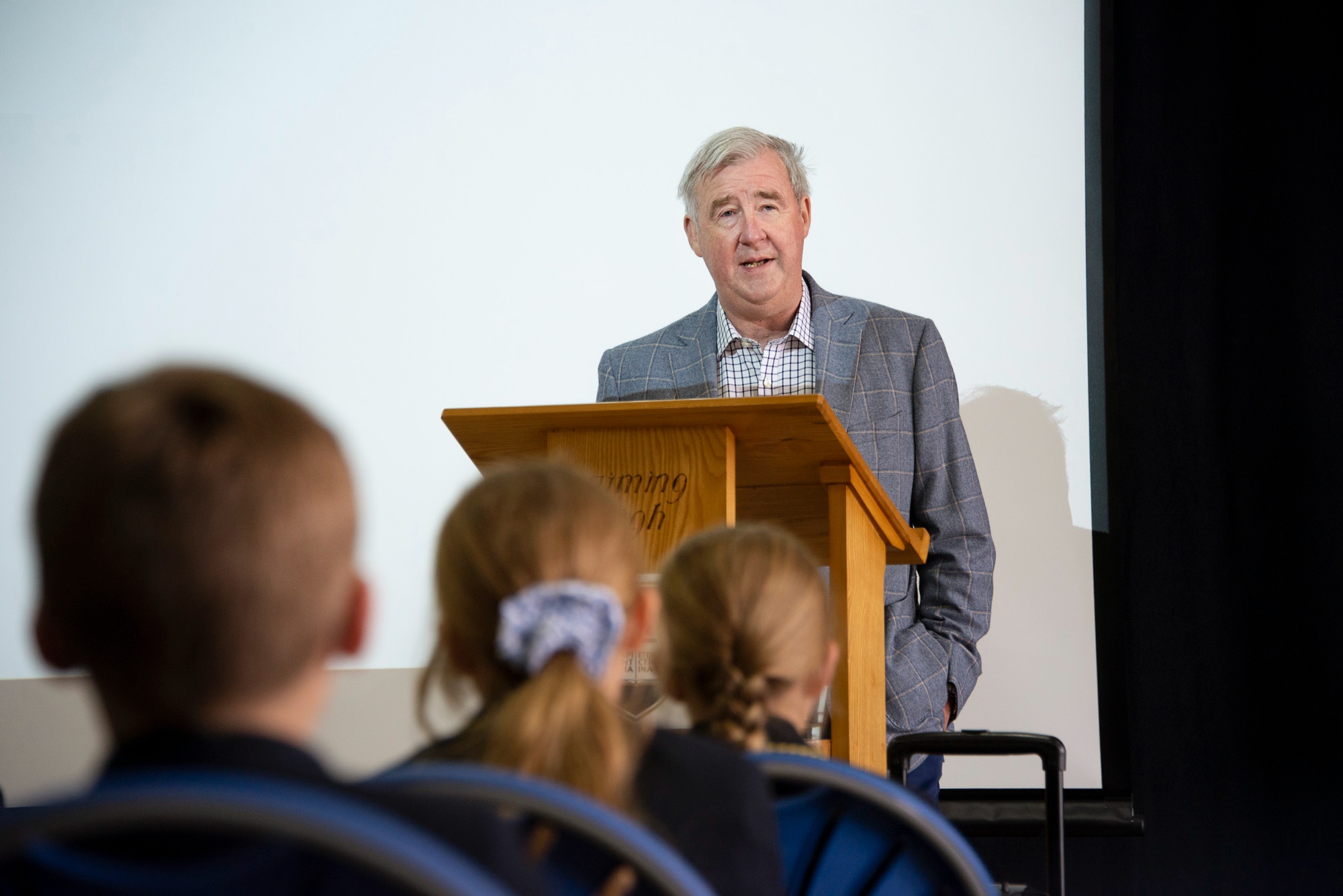 Be inspired and join the conversation.

Since the inception of the Robert Winston Lectures in 2017, we have been honoured to welcome an array of prestigious thinkers and inspirational leaders to Doncaster.

Our vision is to captivate minds, be they pupils, parents or just those with a love of learning. That is why we are delighted to be able to open these talks up to everybody, for free. They are an opportunity to actively engage with experts and learn from their experience.

This year our speakers continue the conversation covering a range of topics including science, history, psychology, foreign affairs and overcoming adversity.

The talks are FREE but booking is required.

Discover this year's speaker below and find links for booking...

An Evening with Lord David Blunkett

BOOK FOR AN EVENING WITH LORD BLUNKETT

Lord David Blunkett was awarded a peerage in the dissolution Honours List in 2015, taking the title of Lord Blunkett, of Brightside and Hillsborough in the City of Sheffield.

He was Member of Parliament for Sheffield Brightside and Hillsborough 1987-2015, and a member of Tony Blair’s Cabinet for eight years from 1997. He served as Education and Employment Secretary, Home Secretary and Secretary of State for Work and Pensions.He is currently a Professor in Practice at the University of Sheffield, Chair of the Board of the University of Law and involved in a range of voluntary and charitable organisations locally and nationally.

Lord Blunkett will share his story from growing up in poverty to the becoming Home Secretary and discuss the challenges he faced, his achievements and what lessons he learned in overcoming adversity, having been blind since birth.

BOOK FOR AN EVENING WITH LORD WINSTON

Professor Lord Robert Winston is an expert in fertility and genetics, still engaged in health research. He is a passionate communicator of science to all age groups, both as a BAFTA winning broadcaster and an author of over 20 titles.
He enjoys tackling difficult ethical, religious and scientific issues. Currently, Professor of Science and Society at Imperial College London and an active Peer in the House of Lords, he is also chair of the Royal College of Music, Chancellor at Sheffield Hallam University and a lover of fine wine, pre-war cars and Arsenal Football Club.

Professor Lord Winston will share his favourite science stories, answer some tricky questions and explain why science is so important in our everyday life.

Tim Marshall is a leading authority on foreign affairs with more than 30 years of reporting experience. He was Diplomatic Editor at Sky News and has worked for the BBC and LBC/IRN radio. He has reported from 40 countries and covered conflicts in Croatia, Bosnia, Macedonia, Kosovo, Afghanistan, Iraq, Lebanon, Syria and Israel. He is the author of the Sunday Times bestsellers ‘Prisoners of Geography: Ten Maps that Tell You Everything You Need to Know About Global Politics’ and ‘Divided: Why We’re Living in an Age of Walls’; ‘Worth Dying For: The Power and Politics of Flags’; and ‘Shadowplay: Behind the Lines and Under Fire’. He is founder and editor of the current affairs site TheWhatandtheWhy.com.

In The Power of Geography, Marshall explores ten regions that are set to shape global politics in a new age of great-power rivalry: Australia, Iran, Saudi Arabia, the UK, Greece, Turkey, the Sahel, Ethiopia, Spain and Space. Find out why Europe’s next refugee crisis is closer than it thinks as trouble brews in the Sahel; why the Middle East must look beyond oil and sand to secure its future; why the eastern Mediterranean is one of the most volatile flashpoints of the twenty-first century; and why the Earth’s atmosphere is set to become the world’s next battleground.

The Chimp Model is an incredibly powerful mind management model offers a simplified way of understanding our two thinking brains and how we can learn to use them to the best of our ability.

Tim Buckle has worked closely with Professor Steve Peters, the founder of the Chimp Model and author of The Chimp Paradox, professionally and personally since 2001.

Tim is a former professional cyclist having represented Great Britain and England at the World Championships and Commonwealth Games in the early 2000s. He spent 4 years as an athlete, competing at an international level and then transitioned into the Team GB coaching staff and cut his teeth as a regional development coach.

In this role, he developed a methodology that engaged and developed not only the young athletes physically but gave rise to a new way of thinking about cycling based around the importance of ‘playing the game’ and also placing a greater emphasis on the development of the person through their sport.

Through Tim’s work as an athlete and coach with British Cycling, he worked with Steve which helped him to gain insight into his own mind and to help others get the best out of themselves.

An Evening with Tracey Neville MBE

BOOK FOR AN EVENING WITH TRACEY NEVILLE MBE

Tracey Neville MBE is a former England netball international and a former England head coach.
As a player, she was a member of the England teams that won bronze at the 1998 Commonwealth Games and 1999 World Netball Championships. As a head coach, she guided Manchester Thunder to Netball Superleague titles in 2012 and 2014.
Between 2015 and 2019 Tracey served as England’s Head Coach and guided England to the 2015, 2016 and 2017 European Netball Championships. She was also instrumental in England’s first ever gold medal at the 2018 Commonwealth Games, days after suffering a miscarriage.

Tracey, twin sister of Phil, younger sister of Gary and daughter of Neville Neville, received an MBE in the 2016 New Year Honours list for services to netball. In 2019, Tracey and Phil both coached England women’s national teams to the semifinal stages of the 2019 Netball World Cup and 2019 FIFA Women’s World Cup respectively.

In 2022, Tracy retired from netball after the World Cup but has since re-joined her former Vitality Netball Superleague franchise, Manchester Thunder, as a Board Member and Performance and Operations Director.

Dr Shepherd has performed over 23,000 autopsies, including some of the most high-profile cases of recent times; the Hungerford Massacre, the Princess Diana inquiry, and 9/11. He has faced serial killers, natural disaster, ‘perfect murders’ and freak accidents. His evidence has put killers behind bars, freed the innocent, and turned open-and-shut cases on their heads.

Join Dr Richard Shepherd for an evening which promise to be utterly fascinating. Dr Richard Shepherd, a medical detective and Britain’s top forensic pathologist, shares twenty-four of his most intriguing, enlightening and never-before-told cases.

These autopsies, spanning the seven ages of human existence, uncover the secrets not only of how a person died, but also of how they lived.

From old to young, murder to misadventure, and illness to accidental death, each body has something to reveal – about its owner’s life story, how we age, justice, society, the certainty of death. And, above all, the wonderful marvel of life itself.

Given the nature of this talk, it is up to parents and guardians to decide whether it is appropriate for the children in their care.

Dr. Lindsey Fitzharris is a bestselling author with a PhD in the History of Science and Medicine from the University of Oxford. Her debut book, ‘The Butchering Art’, won the PEN/E.O. Wilson Award for Literary Science and has been translated into twenty languages. Dr. Fitzharris writes regularly for a variety of publications, including ‘The Wall Street Journal’, ‘Scientific American’, ‘The Guardian’, ‘The Lancet’, and ‘New Scientist’. Her television series on the Smithsonian Channel, ‘The Curious Life and Death of…’, explores some of the most mysterious deaths in history.

In The Facemaker, Dr. Fitzharris presents the compelling, true story of a visionary surgeon who rebuilt the faces of the First World War’s injured heroes, and in the process ushered in the modern era of plastic surgery.